But when Fire’s founding director Rodney Burt wanted to display the memorabilia the sponsors received after the match, he was stumped over the best way to do it.

So he turned to Romsey Picture Framing, who were able to mount the signed cricket bat, along with the custom-made stumps – bearing Fire’s branding – along with a match ball in a custom-made display.

The stunning artwork now adorns the company’s offices in Southampton and attracts attention from the many people who visit Fire in the city’s Royal Mail House, in Queen’s Terrace.

Rod said: “It is an eye-catching piece of memorabilia and is a fantastic reminder of what was a very memorable day for both Fire Hospitality and Burridge Cricket Club, where I am very proud to be a youth coach as well.

“Seeing the Lashings team at my cricket club was very special, and the fact our company was able to lay on the hospitality during the day was the perfect combination of work, rest, and play.

“Martin Bicknell set up a cricket academy at Burridge CC last year, and he was one of England’s most under-rated opening bowlers and should have played more than four tests.

“It is great to see him at Burridge passing on his passion for the game to our youngsters and all that know-how from his time with Surrey and England.

“Sir Gordon Greenidge is up there with the likes of Viv Richards as an absolute West Indian batting legend and is now the Lashings Ambassador.

“I love to see him still involved with the Lashings legends nearly 50 years after he helped Hampshire memorably win the English County Championship.“

The Lashings team also included Malcolm, one of the fastest opening bowlers England has produced, who could return some fire in the day when the West Indies and Australian pace attacks terrorised their rivals on the international stage.

Rod added: “It was a great day’s cricket with great post-match entertainment, making it the perfect day.

“And thanks to Romsey Picture Framing, we now have a permanent remainder of that day. Getting a heavy cricket bat and those great-looking stumps framed was no simple task.

“We were in a bit of a spin over how to get it done until we spoke to them.”

Indeed, the team at Romsey Picture Framing had to devise a special frame large enough – and strong enough – to accommodate the three cricketing components for the display.

“What was special to us was the attention to detail and construction of the presentation piece.

“It’s a large item and has shadow boxes with different colour backgrounds to ensure the bat, ball and stumps really stand out.

“To accommodate the stumps, bat, and ball, safely away from the glass, the box frame needed to be more than nine centimetres deep.

“The challenge was to present the items with our usual conservation-first approach in a robust, clean, and professional manner.

“Fire Hospitality selected our ‘Art Glass, ’ which has anti-reflective properties, reducing reflection and glare by well over 90 percent.

“It also delivers ultra-violet protection to reduce colour fade over time from sunlight by up to 70 percent.

“We love the finished product – Fire Hospitality’s choice of the anti-reflective ‘Art Glass’ shows off the contents.

“We were delighted they were bowled over with it too and hope Fire Hospitality gets many years of enjoyment from having the memorabilia on display in our frame.”

The bat was signed by Greenidge, Malcolm, and Bicknell as well as England spinner John Emburey, Test all-rounders Chris Lewis and Owais Shah, legendary Test Match Special pundit Henry Blofeld, who commentated on the match, and the rest of the Lashings XI.

Rod said: “We love our display and recommend Romsey Picture Framing to anyone looking to mount sporting memorabilia – or any other displays for use in the office, at a sports club, or at home.” 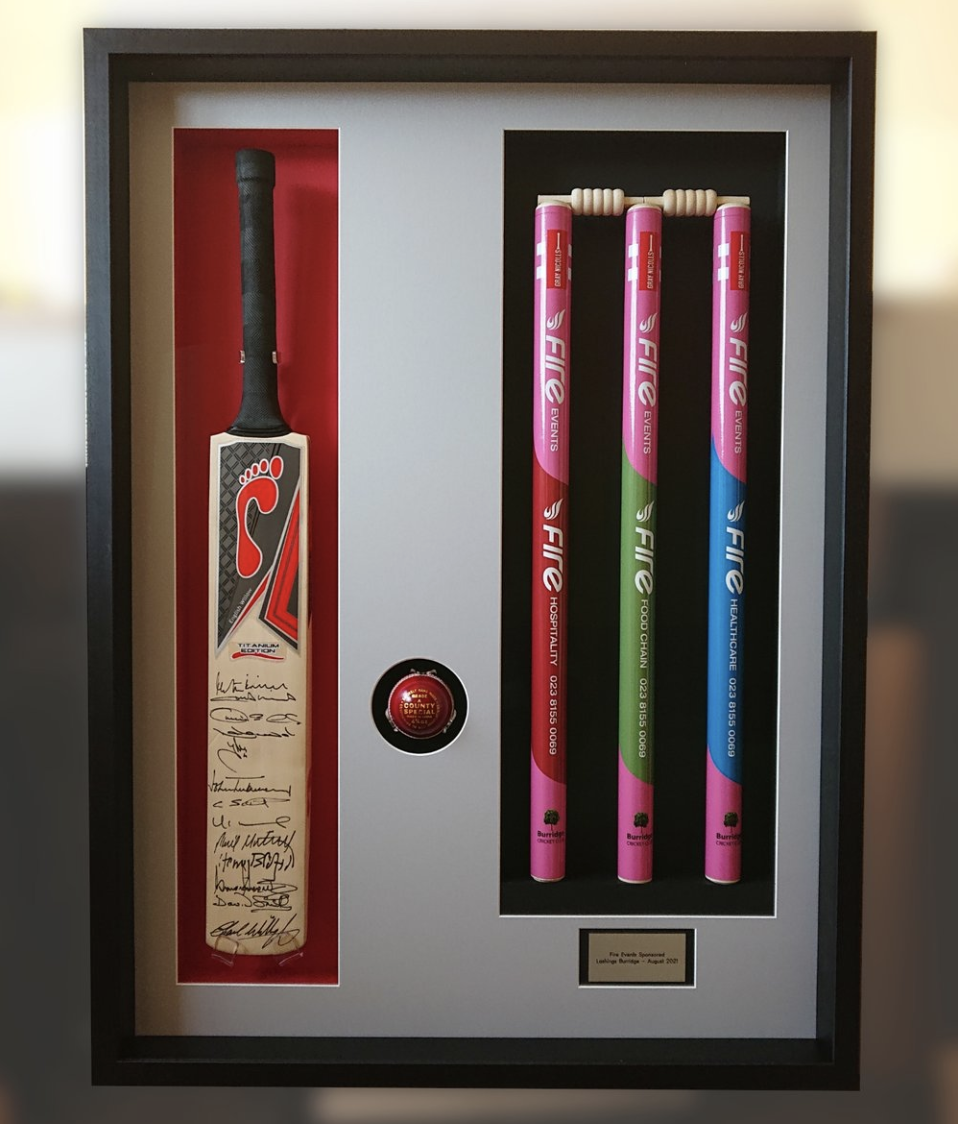 The stumps, bat and ball sponsored by Fire Hospitality

To continually develop and enhance your skills and experience while working with Fire Hospitality.

To lead the way in making Hospitality the profession it should be by offering relevant, accredited and widely-recognised courses.

Fire Hospitality will work to develop your skills, utilising online resources and our in-house training facilities

Contact our team at the numbers above or on 0281 550 069 or email info@firehospitality.com – don’t delay, do it today… and why not tell a friend?